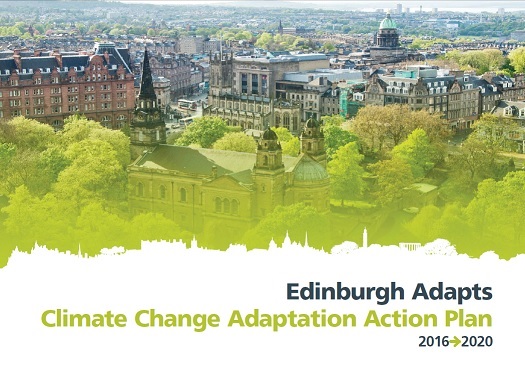 Helping Edinburgh meet the challenges of a changing climate

Edinburgh Adapts began as a joint initiative between Adaptation Scotland and the Edinburgh Sustainable Development Partnership (ESDP). In December 2016 it published Edinburgh’s first Adaptation Action Plan and Vision. Progress on this plan and further adaptation engagement is now directed by a dedicated Steering Group, with members drawn from across key city organisations.

In 2014 the ESDP published the Resilient Edinburgh Climate Change Adaptation Framework. Based on detailed research, the framework set out the risks and opportunities faced by the city as a result of climate change. With the risks and opportunities identified, the city needed a way to co-ordinate and plan effective adaptation action to ensure Edinburgh was prepared for the changes to come.

Developing the Action Plan and Vision

Beginning in spring 2015, Adaptation Scotland supported the ESDP in co-developing a framework to achieve its aim of creating a city-wide Action Plan and Vision to drive Edinburgh’s adaptation journey. Drawing on experience of previous place-based adaptation projects, such as our work with the Galloway and Southern Ayrshire Biosphere, Adaptation Scotland started by setting up a Task Group of ESDP members to help design a set of engagement activities. Through a series of five stakeholder workshops and additional one-to-one meetings, we gathered over fifty stakeholders from businesses, public agencies and community organisations and helped them lay the foundations for the city’s first adaptation action plan and vision. You can read more about the process of creating the action plan and vision in this case study.

The first Edinburgh Adapts Action Plan and Vision were launched in December 2016 by Roseanna Cunningham, Cabinet Secretary for Environment, Climate Change and Land Reform. The Action Plan runs from 2016-2020 and contains over 100 committed adaptation actions. The Vision looks even further; setting out the project partners’ adaptation aims for two key landmark dates, 2025 and 2050, and illustrates the benefits of becoming a climate ready city. Both documents are available to download below.

A dedicated Steering Group drawn from key actors in the action plan has now taken over leadership of the project, with Adaptation Scotland continuing to provide advice and guidance.

Progress on the Action Plan has started strong. In spring 2017 Edinburgh Adapts partnered with the University of Edinburgh to set a public engagement challenge on climate and food in the city with the MSc students, resulting in a final presentation event at the Scottish Parliament. Following this in April 2017, a workshop on Edinburgh’s coastal adaptation challenge brought together researchers and stakeholders to raise awareness of climate impacts coming from the sea. These are just two of the many actions specified in the plan which have already been completed.

Along with working towards the goals of the action plan, the Edinburgh Adapts team have participated in a number of events to raise awareness of Edinburgh adaptation challenge and ambition, including the United Nations House Scotland Climate Change Conference in March 2016, the Forth Estuary Forum Conference in November 2016 and the European Climate Change Adaptation Conference in June 2017.

A full progress report on Edinburgh Adapts’ achievements in its first full year, giving details on actions completed, actions started and areas in need of greater attention, is available below.

A project that brings together stakeholders from across the city and supports them work collaboratively to overcome climate challenges.

The University of Edinburgh